The Spiritual — Heuristic Concept of the Objective Reality: Metaphysics of Spirit

The character of interpretation of the causality of phenomena is of decisive importance in any worldview project. It contains an organizing principle of the methodology of cognition and a concept of the reality as such. The greater is the number of phenomena explained by the used principles of causality, the more large-scale is the World falling under their description. The principles of causality are stated under the influence of the concept on the Objective Reality (ontology) predominant in a given period, i.e., the subjective factor. This is confirmed by the history of adopting worldview solutions in the European civilization. Their onset is based on the doctrine (traceable from Plato) on the dualistic organization of the World: the sphere of things and that of ideas animating it.

The doctrine on “Ideas”, seemingly, assumed involvement of the both spheres into the cognitive process, their inclusion into the unified worldview context, and search for connecting links between the both spheres and mechanisms of their interaction. This was approximately so, on the primitive level, until the end of the Middle Ages when natural phenomena were explained by the sphere of ideas as the Heaven (Divine) force.

Beginning from the Renascence, as the human potencies were glorified, the other strategy of the dualistic interpretation of the Objective Reality began to arise. The strategy was reduced to contraposition, in dualistic schemes of images, of forces realized by the man in the course of his conscious activity. In the interpretation of natural and social phenomena substitution of the Divine force for human efforts occurred more frequently. In new and newest times when potencies of the human intellect came to be considered as limitless, the interpretation of the sphere of animating ideas as an external force prevailed in the art, religion, and politics and penetrated into the social and everyday life and human psychology. In the science it took on the form of the Cartesian methodology (mechanical interpretation of causality) including the three principles: reactivity, causality proper (the present arises from the past), and reductionism.

The indicated tendency reduced the explanation of the reality and then the reality itself to the struggle of opposites, for example: God and Devil in the religion, justice and injustice in the social life, and conscientiousness and unscrupulousness in the human behavior. The science became a receptacle of knowledge for controlling the world, i.e., an analog of the sphere of animating ideas. In the human view of the world the necessity for the invisible Divine sphere passed.

From year to year, however, there appear a larger number of unsolved problems in such a Weltanschauung. They arise because of unsuccessful attempts, within this Weltanschauung, to account for many phenomena in the microcosm, cosmology, synergetics, human psychology, and other fields of cognition. The search for the raison d’etre of the man, mankind, and the world as a whole likewise proved to be unproductive. It became evident that the mankind fell into the ontological deadlock formed due to absolutization of the visible world and that it is necessary to recognize the existence of the invisible world and to overcome the epistemological gap with it.

The spiritual—heuristic concept of the Objective Reality returns the invisible Divine sphere to the Weltanschauung. The concept represents the process of Creation as a self-developing global System in the Continuum of the Universe and indicates that evolution of the System occurs within separate Realities. In each of them, there occurs a cycle of self-development that is completed in radical transformation of material forms with the resulting changeover of Realities. In this concept Transfinite, Metaphysical, Physical, and Transphysical Realities are discussed. Our visible Universe (Physical Reality) is considered to be a product of self-development of the Realities and resides with them in system relations.

Self-development as the suggested mechanism of the evolution process is internally motivated in any system, and its cause is not an external force. The evolution cannot be described in terms of the Cartesian methodology. The three other system principles of causality meet the requirements of self-development, and these are internal activity of participants of the process, their quest for self-development, and hierarchy lying in allowance for interests of higher hierarchical systems and the future in the evolution process. This means that the Realities and sets of their elements (subsystems) are endowed with subjective properties.

The concept starts from the fact that the visible Universe (Physical Reality) is a product of self-development predominantly of the Metaphysical Reality. Its initial state is represented by an infinite set of corpuscles in the Continuum, and these are of not substance nature and are termed primary spiritual entities (PSEs). Their sizes are smaller than Planck sizes, and they possess individual properties and in their behavior are guided by system principles of causality. Their fundamental properties manifest themselves in an infinite potential for self-development via the formation of numerous material forms up to substance forms. This is responsible for the two-in-one nature of substance forms in the visible Universe. This nature causes the possibility of system relations between the Metaphysical and Physical Realities and allows one to consider any visible formation of the Universe as the spiritual—substance formation (SSF).

The Universe as wholeness is a set of subsystems (SSFs) connected (united) on the spiritual level. Their self-development consisting in motion from simple to complex is the process of self-organization. It is put into effect through entry of SSFs (due to mutual compatibility) into new integrities and their isolation from the medium. Such processes are irreversible if they correspond to interests of creation of a higher hierarchical level when their value purposes are formed according to the supreme interests (goals of the existence) of the Universe and the entire set of Realities.

The concept imparts the status of universal methodology of all forms of the Objective Reality to system principles, which makes it possible to overcome the epistemological gap in cognition of the Realities and to help the ontology and modern Weltanschauung as a whole out of the deadlock. Seeing the cause of phenomena in deep fundamentals of material forms and imparting materiality to both spiritual and substance formations the concept arrives at the monistic interpretation of the formation of the Universe and its basis is in system cooperation of all Realities of the Creation. Starting from the metaphysical interpretation of the existence of the Universe the concept considers the Transfinite Reality as the prime cause of our world, the Metaphysical Reality as its fundamental principle, and system principles of causality as the law of formation. Self-development of the Metaphysical Reality (formation of the Universe) followed the two directions: the collectivist direction that is completed by creation of the Ideal word and provides the formation of the Universe intellectually and the individualistic direction that leads to the appearance of substance forms of materiality in the region of stars. In this case, the natural history of the Universe is considered as the continuous process of evolution from elementary substance forms to atoms, molecules, and then more complex forms up to planets, plants, animals, and men. Directing attention to the main features of the evolution process in the Universe (negentropy character, energy constancy, goal and value orientation) the concept treats “mechanisms” ensuring them. In doing so, the spiritual and substance components of the two-in-one Universe are separated, and their discussed synergy in the evolution process is maintained by the spiritual—energy, goal, and semantic “potentials” of SSFs. Prohibition of the second law of thermodynamics for “spontaneous” complication of SSF structures is eliminated in the concept by representation of the Universe as a Reality open to other Realities (primarily to the Metaphysical Reality). In this case, it is stated that there is a mechanism of complication of substance forms common to any evolution act. The mechanism includes a consolidation of microscopic phenomena occurring according to system principles of causality into the unified macroscopic process. The consolidation is possible in connection with the fact that each macroscopic process exhibits its own energy. The energy is generated (or transformed from available energy sources) by substance forms arisen at previous stages of evolution.

In photosynthesis (key evolution process of the formation of terrestrial life), for example, self-organization of inorganic molecules of water and carbon dioxide into more complex compounds, i.e., carbohydrates with participation of the energy arising upon transformation of solar energy by chlorophyll. Photosynthesis is the condition of the process rather than its cause. The cause is, according to the concept, in internal quest of all participants of the process for self-development via creation of carbohydrate molecules. The source of such a quest resides on the spiritual level of molecules constituting carbohydrates, in their nature starting from PSEs and their creator (Transfinite Reality).

The Metaphysical Reality represented in the concept by the substance of the Universe is the material “thinking” active medium that ensures the process of its formation energetically, intellectually, and spiritually. Note that the infinite set of PSEs alone is of substantial significance in the formation of the Universe. The character of actualization of their potencies determines morphology of the space and its volitional subject assistance to the evolution process in the Universe.

The concept comes to ideas on the goal and value of the evolution through analysis of the law of growing quality of substance forms and energies arising in the course of formation of the Universe. Their correlation is reflected in an enhancement of the quality of generated energy, as substance forms are improved. The enhancement is reflected in the sequential appearance (in the course of evolution) of mechanical and electrodynamic energies, then energies for intraatomic, interatomic, intramolecular, intermolecular, and intracellular interactions up to energies for active life of plants and animals, energies of human consciousness, psychology, and creative potencies.

The man as the acme of evolution of substance forms (its supreme hierarch) is the incarnation of the goal and value of their formation in the Universe. What are the goal and value of the man as such? They result from the aforesaid reasoning and from the conceptual human destination to carry out the radical transformation of substance forms of the Universe into a new material form required by the Transphysical Reality. The value of social societies beginning with family and ending with State and mankind as a whole is determined by to what extent they assist to the formation of such a man who could be guided in his behavior by system principles of causality. Therein lay perspectives of his spiritual growth and such a self-development of his soul that could provide his body-independent existence and creative participation in the formation of the following Reality. 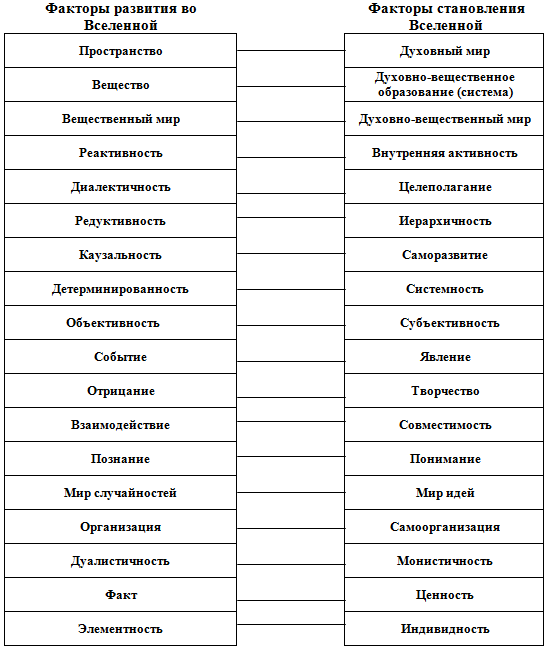